Donna and I watch our grandchildren and a few other children. As we counted them up, we have watched over 20 children not counting our own children. I think that babysitting your grand-kids improves and extends your life and studies have confirmed that.

If you discovered the secret to a longer and more meaningful life I am sure we would all do it.  Apparently, watching children is that secret. People frequently say that being around children will make you feel younger and reports can actually measure and identify the benefits from caring for children. If the experts are all saying that “caregiving” gives older people a purpose in life and helps keeps them active, then maybe even small doses of babysitting may extend your life.

“Caregiving may give caregivers a purpose of life because caregivers may feel useful for the others and for the society,” said Bruno Arpino, who was the associate professor at the Pompeu Fabra University in Barcelona, Spain, in 2016, according to Reuters Health.

Researchers have actually found that grandparents who watch their grandchildren have a tendency to live longer than seniors who don’t. Researchers with Berlin Aging Study conducted investigations over almost 20 years on the effect of caregiving on mortality. The study was published in the journal Evolution and Human Behavior in 2016.

The Berlin study showed that after factoring in grandparents’ age and state of health, the risk of dying over a 20-year period was one-third less for seniors who took care of children as compared to those who didn’t. More than 500 seniors were interviewed and had medical tests at their homes, doctors’ offices, and hospitals, and these tests were repeated every other year between 1990 and 2009.

Participants were asked how often they cared for children of during the last year. This was defined as looking after or doing something with a child without the parents being there. Then this was scored from 1 (never) to 7 (every day). The sample did not include any primary caregivers who had full custody of the children, though it did include those who watched non-family members.

We are watching both grandchildren and children of friends that I affectionately call the strays or OPCs (Other People’s Children). The oldest OPC, Andrew, will be 22 in August and lives in Arlington Texas. Donna started watching him after the company Donna was working for closed. We are looking forward to seeing Joedin this summer another of our OPCs. She and her family moved to North Carolina seeking employment. She comes up during the summer to spend time with us. We think of them both often. They feel just like kin to us.

This study concluded that spending time with your grandchildren and helping friends and family members with their children most likely gives people a feeling of purposefulness and assists them to keep mentally and physically active running after a child. Anyone who has looked after a preschooler can attest to having to be physically active.

We are in our 70’s and are still looking after grandchildren and OPCs. Every time a child leaves our care due to entering school, moving or a change in their family situation, we discuss taking on another child. We both agree that we don’t need the money or that it’s tiring for us to do but then someone asks “Are you still watching children?” We always answer yes and take on another child.

As per Reuters Health, half of the grandparents who took care of their grandchildren were still alive 10 years from their first interview. Whereas, those who didn’t provide help lived for only about five years. It is extremely important however for every person to decide, just what “moderate amounts of help” means. As long as you do not feel frazzled about the help you provide you might just be doing something good for others and for yourself.

Researchers have found that grandparent babysitters had a 37% lower mortality risk than adults of the same age that do not provide care. Research has also indicated that people involved in providing care to children had a reduced risk of dying during the study follow up than people that didn’t watch children. But the study can’t prove cause and effect can only suggest this correlation.

So if you are a senior, go find some relatives or neighbors who need your help or support part-time. It might be a challenge but there are all sorts of ways you can help others. Watching kids so mom and dad can work or have a night out, picking kids up after school or providing a “bridge” between the time the kids get out of school and the time their parents get home. We have done all three.

Additional research would be required to find out the cause of the longer life expectancy of caregivers, however researchers present a few explanations. But I really don’t need some expensive research from some razzle dazzle organization to tell me just how good watching children makes me feel, how it lets me connect with my youth again. 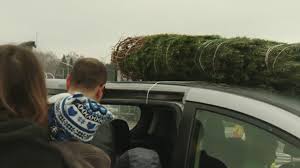 I have written about family traditions before, this time I would like to share a few Christmas traditions from my past and a few that my children, grandchildren and I practice today.

My memories of Christmas as a young boy took place at 496 Berkshire Avenue, Buffalo. About a week before Christmas, we would go shopping for a tree. It had to be a long needle fir tree and it had to be symmetrical without any bare spots, nothing else would do. We would sometimes have to go to several Christmas tree lots that popped up on every vacant piece of land in the city. We would then tie it on the roof of our car and take it home like some kind of hunting trophy and I guess it was. It would spend a few days trussed up like a bird being prepared for cooking by on our front porch awaiting it’s role in our house.

The dining room table was disassembled and put in my sister’s room to make room for the Christmas tree. Once the Christmas tree lights were untangled, which sometimes took quite a bit of time, they had to be tested. My father was the only person allowed to put these on the tree. My mother would supervise and my father would have to swap bulbs until no two adjacent bulbs were the same color. We would then decorate the tree with all kinds of ornaments, both store bought and homemade. The final decoration would be “icicles” made of thin ribbons of lead.

On Christmas Eve my brother and I would retire to our bedroom on the second floor where we would have a hard time falling asleep in anticipation of Santa Claus paying us a visit. For some reason or other Santa would wrap our presents in the Sunday comic pages. I always thought he had run out of wrapping paper and was surprised that he got the Buffalo Courier Express. I think my favorite toy that Santa ever brought me was a battery operated, walking robot with flashing lights and “sound effects” that I received one year.

Many years later, after I got married, Donna and I moved to Massachusetts while I was in the Navy. We had a small tree but we couldn’t afford many ornaments. We made do with what we had and what people gave us. One thing I did was affix a starfish to the top of our tree that a buddy Ed and I collected from a local beach and had dried in the basement of my apartment.

That was fifty years ago. We still have that starfish adorning our tree. This has developed into a family tradition. All of my children have a starfish of their own now that sit atop their tree. A few years ago I gave all of our grandchildren a starfish so when they are on their own they will remember us with this tradition.

According to an old German legend, if you find a bird’s nest in your Christmas tree you and your family will experience health, wealth and happiness in the coming year. Who can’t use some good luck like this?  We always have a bird’s nest in our tree and my daughter Liz has one in her tree also.

Other Christmas traditions our family has involve food. Every grandchildren gets to select, as part of their present a “Christmas” food from Nana and Papa. They have picked things like Ramen noodles, potato chips and whipped cream as some of their choices.

My son, Erik and his wife, Heidi also host a Christmas Eve dinner that starts with snacks during the afternoon, Olives and Pickles, Chips and dip, Buffalo chicken wing dip etc. Actually you could graze your way thru the afternoon and not need anything more.  But then they have a full blown meal in the evening. We can choose from a cold cut platter and rolls, Beef on weck, Beans, macaroni and pasta salads, regular salad and many other dishes. They also set out Christmas cookies and various other sweets. One year they offered us homemade marshmallows.

Just in case you didn’t have enough to eat, the following morning my oldest daughter, Liz had a Christmas day brunch at her house. We have Stuffed French toast, Breakfast sausage links, Potatoes, Muffins, Eggs, and many more things to eat. With all this food, I was ready for a nap.

After Brunch we would all settle into the living room with me in a recliner in front of her roaring fireplace to open presents. I love watching the eyes of Ian and Kaelen, the younger grandchildren, light up as they rip open the colorful wrapping paper and see what gifts they have received. What starts as a controlled afternoon quickly turns into chaos. It is wonderful having all our children and grandchildren under one roof on this day.

This year unfortunately, her house has been sold and she is temporarily staying with us. My youngest daughter, Dawn has offered up her house for Christmas brunch as long as in her words “I don’t have to cook”. Dawn serves a fabulous Thanksgiving dinner so I don’t blame her not wanting to also do Christmas, so I guess Liz will be spending time at her house cooking our meal.

It really doesn’t matter where we hold our holiday celebrations though, they could be held in my garage or a storage shed on Transit Road. It’s the people and the food, the conversation and the laughter that make this season important to me.

Norb is a writer from Lockport that has also lived in Buffalo and Massachusetts.